The Level Challenge is one of the many quests added by Median XL: Sigma and is the only one available in Normal difficulty. The character must be level 50 or higher to start it.

Warning: The challenge is intended for a character less than level 60. If you past level 59, you can still do the challenge, but with the added penalty of 2 Arcane Crystals per 10 levels to create the charm.

This charm is obtained by transmuting three shards into the Horadric Cube. The elemental resistances of this charm can be improved up to 50% by cubing a Scroll of Resistance given by Maya for saving Anya in Act V (one per difficulty level). 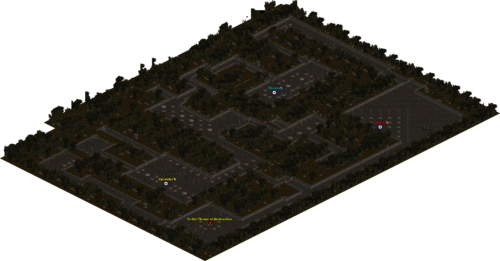 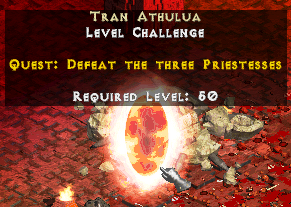 In Normal Difficulty, defeat the Infernal Contraption in the Throne of Destruction and enter the red portal to Tran Athulua. Your character appears to the south east of the map, in a big room. Move northward in the corridor until you encounter a group of Amazon Warriors. Kill them as quick as possible and do the same for any of them you'll encounter later. If your character dies too fast or if the progression is too slow, read the section below about strategies.

After killing some Amazon Warriors and moving a little bit to the north, you'll see a passage on the left. Go there and continue until you reach a wider corridor. To the south is the first Amazon Priestess (Lycander) you need to kill. She's in the middle of the spacious room filled with lots of Amazon Warriors. Kill them all before attacking the priestesses to reduce the risk of dying (do the same for each priestess). As main attack, she shoots arrows that do both physical and lightning damage. To end your life more quickly, she uses Phalanx (a row of amazons shooting arrows) quite often and Magnetic Field. Upon his death, she drops a

Shard of Thunder. You need three of them to make the Sunstone of the Twin Seas.

Now, you have a choice: either you go back to the first passage where was the first Amazon Warriors you killed and move to the north to kill Philios OR you do a carnage in the narrow corridors until you reach the little room where is Skovos, to the north. Unless your character is potent and has a decent defense rating (less than 20% chance to be hit by an Amazon Warrior), it is less risky to go back the first passage to kill Philios first, than moving by the north to murder the last priestess, than the other way around. The reason is that narrow corridors mean less space to move, therefore higher chance to get hit by arrows, so to die.

Once back to the first passage, move ahead until reaching a huge room. The second boss is in the south west corner. She shoots fire arrows (physical and fire damage) and she uses Phalanx too. Sometimes, she casts Lava Pit. Kill her and pick up the

Shard of Fire. Go north, then make your way in the corridor on the left until you reach the room where awaits the last Amazon Priestess.

Skovos shoots cold arrows (physical and cold damage), and uses Phalanx and Blizzard. Be careful, cold damage chills you for a few seconds, which slows you down. She drops the

Shard of Ice when she dies.

To complete the quest, put the three shards into the Horadric Cube and transmute them. Voilà! You got your first charm.

In Tran Athulua, the Amazon Warriors are the main enemy. They are quick, fairly strong and they exclusively attack from distance with their bow. Each of their arrows deal high physical damage and kill with ease unprepared heroes. However, they don't have many life points and their defense rating is quite low.

There are also Jungle Snakes that lurk around you, most of the time invisible. They inflict high poison damage and they have the knack of surprising you in the worst situations, for example when you try to retreat to heal your wounds or when you are in the middle of a perilous battle.

Those monsters are as dangerous as some elite foes you encountered before in the regular levels.

Now you know a bit more about them, it's time to prepare yourself to defeat them and to obtain the shards needed to complete the quest.

The most obvious recommendation to get ready is to improve your equipment. Uptier all of them to at least tier 3, but the bare minimum is to enhance your weapon (to kill faster) and your body armor (it often has the highest defense of all armor pieces). It may take a while before you get a better gear, but it's worth the effort.

Depending on which character build you use (melee, ranged, caster or summoner), there are item modifiers more important than others.

Melee character
Look for items that improve your attack and defense rating, in addition to your combat speeds (Attack Speed, Block Speed, Hit Recovery). Also, he needs to keep himself alive with one or more source of life regeneration (life leech, life after kill or life on attack). Other useful modifiers: stun attack, crushing blow.

Ranged character
As for the melee character, improving your attack rating and your attack speed is critical. Having a better defense rating is important too, but don't focus too much on that, since you could use some meatshields to take damage for you (reanimated or summoned creatures). Also, one or more source of life regeneration is welcome (life leech and/or life after kill). Other useful modifiers: crushing blow, any skill triggered on striking.

Caster
The most important modifiers for a caster are X to Energy, X to Mana, X to Energy Factor to Spell Damage, % Cast Speed and Regenerate Mana. Since that type of character is quite fragile, you also need meatshields (reanimated or summoned creatures) to take damage for you.

Furthermore, you might want to hire a mercenary to help you in Tran Athulua. The best ones for this location are the Examplar from Act II (has an innate physical damage resistance and because he uses Retaliate, a good crowd-control skill) and the Barbarian from Act V because he is very aggressive (the enemies will focus their attention on him).

Finally, to be successful in Tran Athulua, you need to keep moving and dodging arrows while killing your enemies. You may want to use any skill that debuffs them. Of course, buff yourself! If you hired a mercenary, you could use him in a support role.

Retrieved from "https://median-xl.fandom.com/wiki/Level_Challenge?oldid=19915"
Community content is available under CC-BY-SA unless otherwise noted.